South Louisville to get thousands of new trees to intercept air pollution, with researchers looking into how people’s health responds 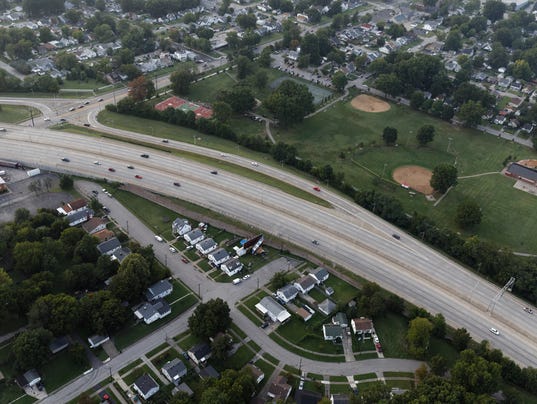 Imagine trees as a drug to prevent heart disease.

Aruni Bhatnagar, a medical professor at the University of Louisville, does – along with a team that’s unveiling a $14.5 million research project in Louisville on Thursday.

“We think (trees) might be more effective than statins,” the air pollution expert said of the widely prescribed class of drugs used to lower blood cholesterol, a risk factor for heart disease and stroke.

The Green Heart project, as it’s called, involves the University of Louisville, The Nature Conservancy, The Institute for Healthy Air, Water and Soil and other partners who will transform four South Louisville neighborhoods with as many as 8,000 trees and other plantings.

The area is roughly between Churchill Downs, Iroquois Park and Louisville International Airport. It’s home to about 22,000 Louisvillians.

The trees will need to be large enough to make a difference right away. That means some could be as tall as 30 feet. 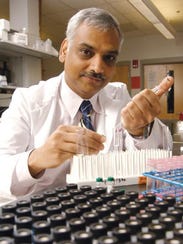 Trees, shrubs and other plants will be placed where they can best soak up lung-damaging air pollution, like along the Watterson Expressway or other busy roads within the study area. Researchers at the university and across the country – backed by $8.5 million from The Nature Conservancy and other grants from the National Institutes of Health and other sources – will then closely track the health of as many as 700 residents, looking primarily at any cardiovascular response.

The idea that human health is related to trees extends back to the story of Genesis, where a tree of life was planted in the Garden of Eden to bring immortality. In recent decades, scientists have been exploring the connections between health and trees.

More: Billboard company wants to cut down hundreds of trees on public land

Trees breathe in their own way, taking up the heat-trapping gas carbon dioxide while creating life-sustaining oxygen. While trees produce volatile organic compounds – a source of ozone pollution – they also absorb ozone and other pollutants and trap especially dangerous tiny particles.

But Bhatnagar said that “nobody has evaluated the specific health effects of planting green spaces.”

There have been no other studies like it, where people’s health is monitored before, during and after a major, neighborhood-scale tree planting, he added.

The health of people who live near the newly planted greenery will be compared to those who live elsewhere in the study area.

“Instead of giving someone a pill, we are giving them greenness.”

“We are hopeful to see changes in a few years,” he said.

It’s like a drug trial, with nature as the drug.

Related: Don’t cut our trees in front of billboards and a breath of fresh air | Letters

“Instead of giving someone a pill, we are giving them greenness,” said Chris Chandler, director of urban conservation with The Nature Conservancy’s Kentucky chapter.

The trees, he said, will be “some of the largest that will be able to be transplanted,” he said, adding that “it (will be a) really unique urban laboratory.”

With guidance from the public, Green Heart team members will be deciding where and what to plant based on what’s best for reducing air pollution. That could include obtaining permits to plant in state and federal rights of ways, as well as permission from property owners, he said.

Trees also could be planted at homes, churches, schools, businesses and parks, along with shrubs and native grasses and other plants, he said.

On the environment: Balloon releases are illegal in Louisville. But is the law full of hot air?

Nobody in the four neighborhoods will be told not to plant trees nor will any other tree planting initiatives there be discouraged, Chandler said.

“We are going to build a relationship with the community,” said Veronica Combs, executive director of philanthropist Christy Brown’s air, water and soil institute. The institute has identified 200 community leaders and begun to meet with them. “We are getting their feedback,” she said, noting trees are not everyone’s top priority.

Crime is a top concern for many, she added.

In addition to studying cardiovascular health, researchers also plan to see if there are any changes in crime rates, stress, economics and other social-psycho outcomes. Some studies suggest trees can help in those areas, too.

Some people will want new trees on their property and other’s won’t, said Nancy Bowman-Denton, president of the Beechmont Neighborhood Association, one of the four neighborhoods chosen for the study. The others: Jacobs, Wyandotte and Wilder Park.

But she said “the more trees the better,” adding that the association’s board of directors is very receptive to the program.

“I’m excited about it,” she said. “This is another way Louisville can move forward and be an example of a community that’s responsive to the needs of its people.”

Buy PhotoWyandotte Park in Louisville has seen some trees being planted to help curb pollution. More are expected to be planted. (Photo: Matt Stone/The Courier-Journal)

A city-sponsored study in 2015 found Louisville was losing some 54,000 tree a year due to age, disease and storms – and that was before the emerald ash borer began wiping out tens of thousands of additional trees locally.

The Louisville metro area has also long suffered from poor air quality. While it’s much improved over decades past, the region still struggles to meet ever-tightening clean-air standards for ozone and the smallest particulates.

And like in other cities, roads and freeways jammed with cars and trucks and their exhaust pipes can create localized pollution hot spots.

The new research has its roots in a pilot project at a Louisville school. The air, water and soil institute, of which Bhatnagar is a board member, the city of Louisville, the university and other partners, first experimented with trees and air pollution last year.

A wall of trees and shrubbery was planted in the front lawn of St. Margaret Mary school to act as a filter for the air pollution from vehicles on Shelbyville Road. The levels of the smallest particulates dropped as much as 60 percent, and there were indications that some students’ immune systems had improved, Bhatnagar said.

While tree advocates often speak of the value of trees – they also cool cities and reduce stormwater pollution and sewage overflows – their specific benefits to air quality and human health have not been “nailed down yet,” said Portland State University environmental sciences professor Linda A. George, who has researched the subject but is not involved in the Louisville study.

“There is quite a bit of variation in the literature about the role of trees (with) some studies show an effect other do not. Usually, this kind of variability means that there are other variables involved,” she said.

Still, in Portland, her research has calculated the potential annual respiratory health benefit from trees due to a reduction of just one pollutant, nitrogen dioxide. That Oregon city could thank its trees for an estimated 7,000 fewer days of missed school due to asthma in youth; 54 fewer emergency room visits of all ages; and 46 fewer hospitalizations among the elderly due to respiratory problems triggered by the pollutant, which is associated with tailpipe emissions. 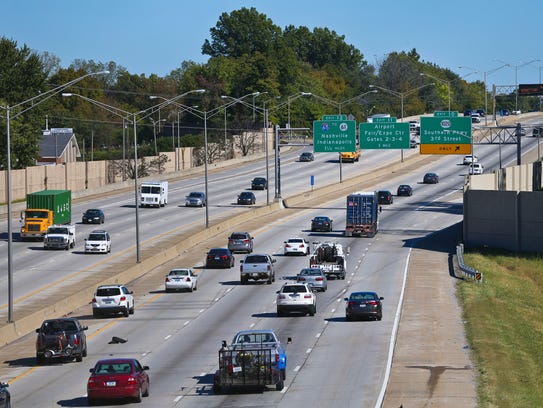 Buy PhotoI-264 in Louisville near Taylor Boulevard could see more trees being planted in the area. (Photo: Matt Stone/The Courier-Journal)

And U.S. Forest Service researchers in 2013 found that the massive loss of ash trees over 18 years in 15 Midwestern states, including Indiana, to the emerald ash borer was perhaps connected to thousands of premature deaths of people.

That paper did not prove any particular cause. But the authors suggested a combination of reasons why losing 100 million trees might have led to more human death, including the fact that trees help clean the air of pollutants, lower temperatures and generally make people feel better and reduce stress.

In the fight against heart disease, Bhatnagar said he’s looking to this new Louisville research for a potential game-changer.

“Heart disease rates have been coming down,” he said, but in recent years the rate has slowed and flattened out. “We think we need to try something different,” he said.

Check this out: Bank president cares about trees; programs for disabled save money

As much as 70 percent of heart disease is “completely preventable,” yet it remains the largest cause of death.

Buy PhotoWyandotte Park in Louisville has seen some trees being planted to help curb pollution. More are expected to be planted. (Photo: Matt Stone/The Courier-Journal)

Lifestyle factors such as poor diet and lack of exercise have long been associated with heart risk, with recommendations continuing to target people’s behavior or choices.

“But there are certain things in the environment” that are also risk factors, he said.

The study could have potential implications for billions of people who live in cities across the globe with unhealthy air because of particulates, he said.

This could lead to a model “that could guide and advise people how greenness could be used to promote health and minimize exposure to pollutants. This is a test case. We do this grand experiment … and then it informs other cities.”

Green Heart at a glance