Beautiful, rare and grand. The plants tell their stories

California’s 6,000 plant species, over 40 percent of which are unique to the state, make the state a biodiversity wonderland. But with 40 million people, and ag land that produces half the nation’s food, many species are threatened. Learning their stories can help save them.

Cal Poly botany professor Matt Ritter is concerned about reports that Americans can recognize over 1,000 corporate logos, but few of their local plants. He cited David Orr’s work on children and nature.

“Studying botany teaches students to identify plants,” he said. “The name is the password to the plant’s story. It’s a way to combat the apathy that leads to biodiversity loss. My interest culminated in this book, about California’s iconic plants.” 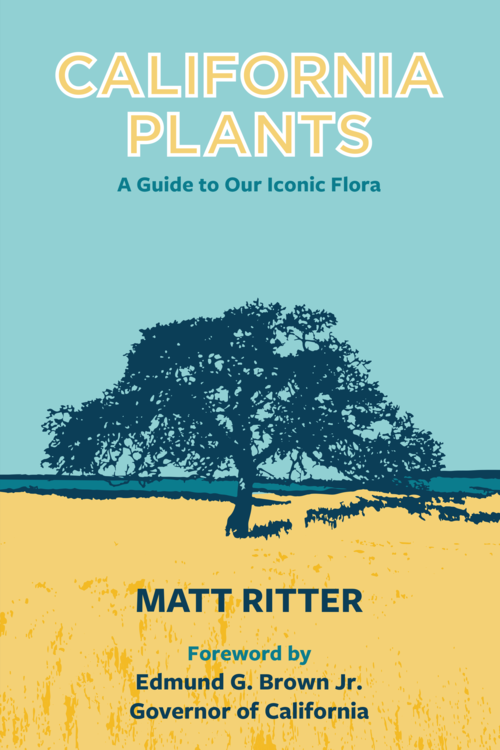 As a botany professor for 15 years, he takes his students around the state to appreciate “this wonderful flora.” They learn between 700 and 1,000 plant identifications. 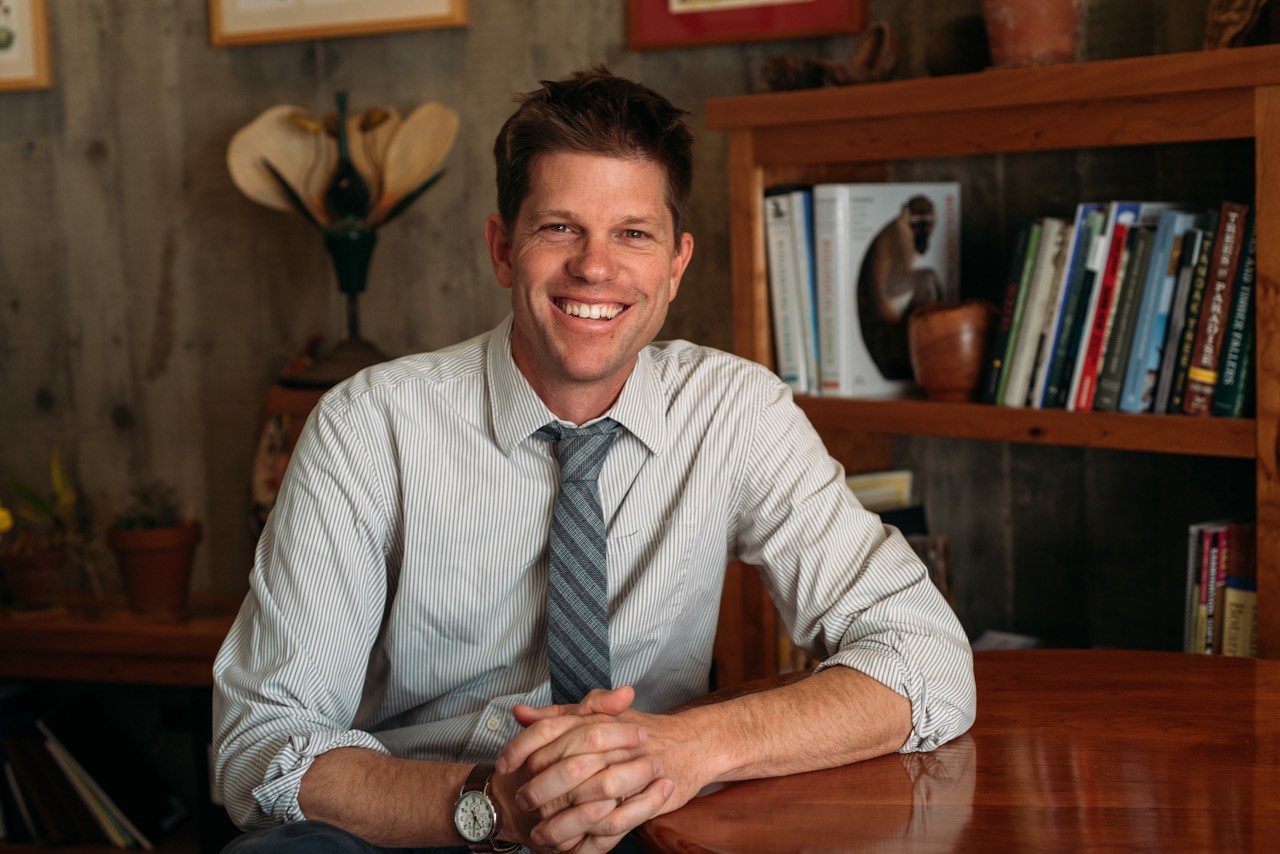 “We are in the hot spot of the hot spot,” he said. “There are over 1,900 native species in SLO county. It’s a huge amount of biodiversity over a small area.”

Botany fell on him

Dr. Ritter grew up in a remnant stand of Valley Oaks in Potter Valley in Northern California. He got interested in large trees after a Valley Oak more than six feet in diameter fell over on his childhood home. The family was out of town at the time, and the following week’s rain ruined the house.

“Botany came to me,” he said. “I knew nothing about oaks then. I was interested in trees in general, and large trees especially. I wanted to know more.”

Now serving as coordinator of the California Register of Big Trees Program, he keeps track of champion and heritage trees. Many that were on the list died during the drought, including the Monterey Pine champion in Monterey. The champion Monterey Pine is now a planted tree in South Africa, much smaller than the previous champion.

Oaks are significant historically in California. The Spanish thought they were English oaks, and called them Robles. The oaks were a sign of the richest soil, the most fertile land. They were ripped out of the fertile lowlands, to make way for agriculture.

“You don’t see actual plants most of the year,” he said.

California’s green hills today are the result of non-native grasses that have taken over the landscape. Other researchers are exploring the question of what the landscape was like before European contact.

That green period can illustrate the contrast of California’s landscape: coastal scrub and chaparral, oak woodlands, grasslands on the alluvial plain.

Pygmy plant is a teeny little plant with clusters of brilliant red flowers. Dr. Ritter found them flourishing in Monterey County after the fire at Fort Ord.

“They are small plants,” he said. “You have to get on your belly to see them.”

Camatta Canyon Amole, also called purple flowered soap plant, has leaves with curly edges like lasagne noodles. There are two varieties, and he has found them at Fort Hunter Liggett and on Red Hill Road. It’s native to California, endemic, meaning found nowhere else, and rare. Its native range is only ten acres.

“They are outcompeting very rare species,” he said.

Monterey Pine is the rare species that defines Cambria. It’s one of 18 pine species in California, the second rarest, after Torrey Pines. Cambria’s stand is one of only three native stands on the continent. Its lopsided cones open in the heat, during fires and on hot days.

“I wish I had been on those field trips,” Dr. Ritter said.

Monterey Pines were rare even then, estimated at 24,000 acres at first contact with Europeans. They were cleared to build towns.

The range of Monterey Pine has expanded and contracted over the millennia, from as far north as Tomales Bay to as far south as Baja California. Fossil pollen has been identified in the La Brea Tar Pits. It was never continuous across that entire area.

Robert Louis Stevenson wrote about Monterery Pine in Chapter 2 of his book, Across the Plains, 1879.

The Desert Mariposa Lily is one of 67 poppy species, most of which occur in California.

“It’s like a California poppy but much better,” Dr. Ritter said.

John Steinbeck described the beauty of California poppies and lupine, the yellow and purple that carpet our hillsides in spring, in East of Eden.

The Giant Sequoia can live more than 3,000 years. It grows from a tiny seed in a small cone. From 10,000 seeds per cone, and cones abundant on the tree, Dr. Ritter figures a single tree can produce a trillion potential offspring over a lifetime.

Giant Sequoias continue growing and producing cones and seeds no matter how old they get.

The Bristlecone Pine, along with Western Juniper, take their places as three of the four oldest trees in the world. The oldest tree, a Bristlecone Pine in Inyo County, is over 5,000 years old. Two sides of this tree are separated by 2,000 years. They have been separate so long, that they have developed different genomes. 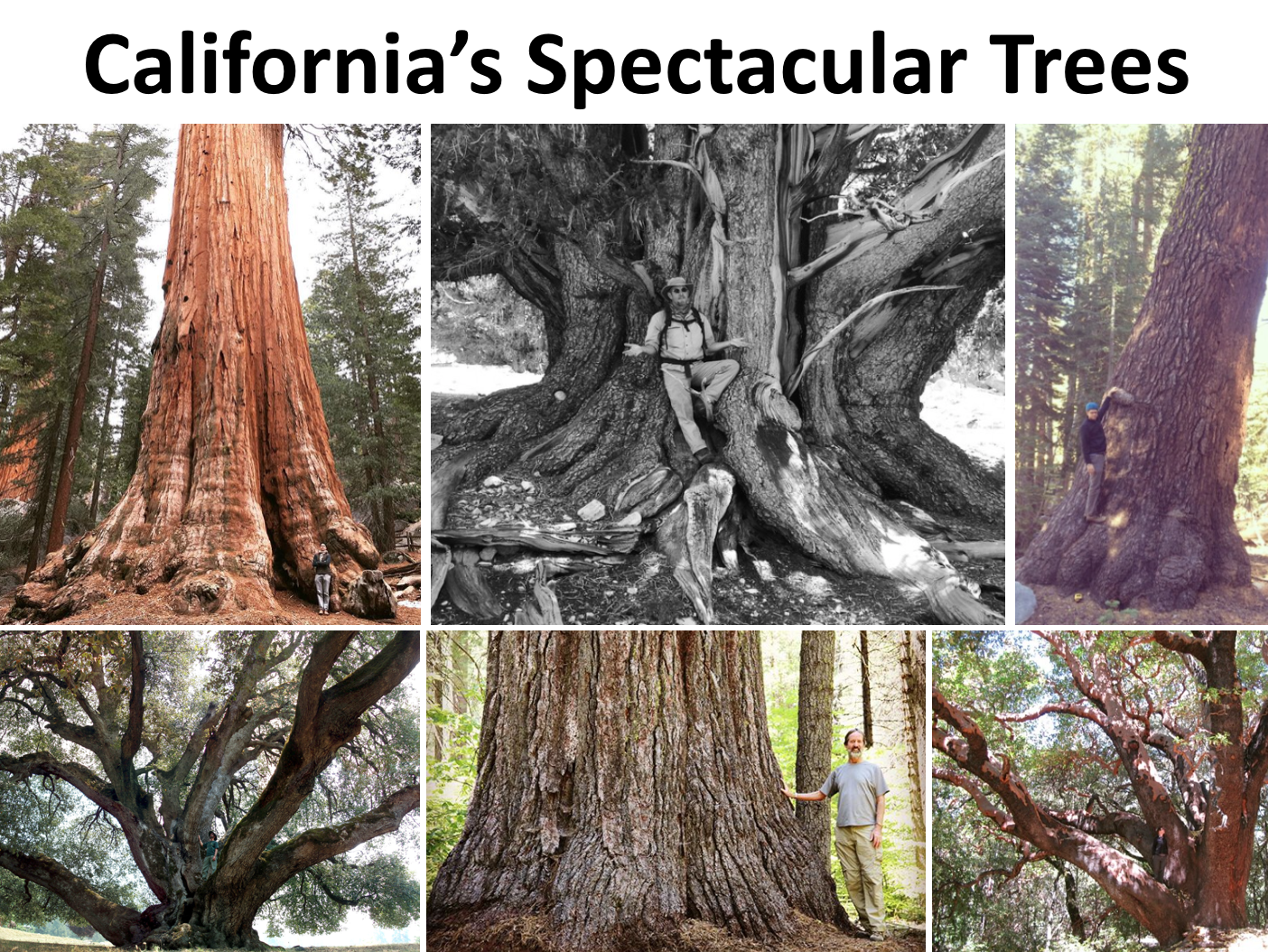 People thought Coast Redwoods were inexhaustible, but relentless logging turned them into a rarity. The trees that originally covered two million acres are now reduced to 120,000 acres. Ninety-six percent of the old growth forests have been logged.

“I’m glad someone thought to save some of it,” Dr. Ritter said. “We lost the most spectacular individuals. Some were probably over 400 feet tall.”

He remembered picking through stacks of redwood lumber as a teenager, 25 years ago.

“What we threw away is not even available anymore,” he said. “Coast Redwoods were extremely impacted because of that economic value. They yielded huge amounts of wood.”

The trees were so large, that without fossil fuel, they were nearly impossible to cut down. Coast Redwood lumber was used to build San Francisco twice: the original city, then the rebuilt city after the 1906 earthquake and fire.

The future of trees

Trees sequester carbon. Dr. Ritter asked a colleague to estimate how many trees would be required to offset each person’s carbon footprint. After qualifying many factors, he calculated that every person would have to plant 80 trees a year.

Dr. Ritter told the trees’ stories, and he recounts them in his book. Stories can help people learn about the trees, and be inspired to save them.

“I want to help people pay attention to what’s around them,” he said. “I hope the book helps people to enjoy them. I could go on for hours.”

Listeners asked what they could do to help trees.

“Plant more trees, all the time,” he said. 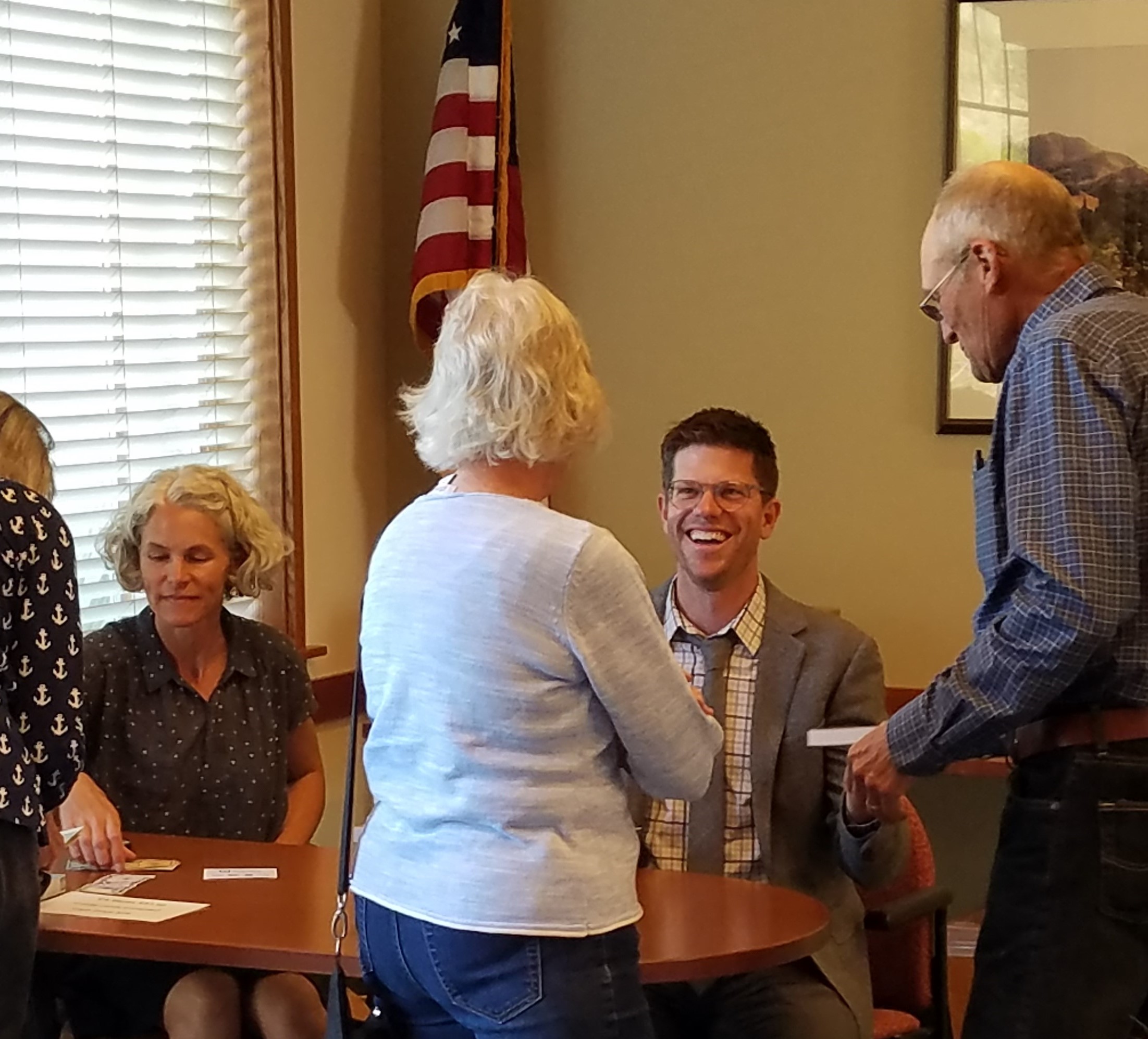 He serves as Editor-in-Chief of Madroño, quarterly journal of the California Botanical Society.

These pitch-pines of Monterey are, with the single exception of the Monterey cypress, the most
fantastic of forest trees. No words can give an idea of the contortion of their growth; they might figure without change in a circle of the nether hell as Dante pictured it; and at the rate at which trees grow, and at which forest fires spring up and gallop through the hills of California, we may look forward to a time when there will not be one of them left standing in that land of their nativity. At least they have not so much to fear from the axe, but perish by what may be called a natural although a violent death; while it is man in his short-sighted greed that robs the country of the nobler redwood. Yet a little while and perhaps all the hills of seaboard California may be as bald as Tamalpais.I have an interest of my own in these forest fires, for I came so near to lynching on one occasion, that a braver man might have retained a thrill from the experience. I wished to be certain whether it was the moss, that quaint funereal ornament of Californian forests, which blazed up so rapidly when the flame first touched the tree. I suppose I must have been under the influence of Satan, for instead of plucking off a piece for my experiment what should I do but walk up to a great pine-tree in a portion of the wood which had escaped so much as scorching, strike a match, and apply the flame gingerly to one of the tassels. The tree went off simply like a rocket; in three seconds it was a roaring pillar of fire. Close by I could hear the shouts of those who were at work combating the original conflagration. I could see the waggon that had brought them tied to a live oak in a piece of open; I could even catch the flash of an axe as it swung up through the underwood into the sunlight. Had any one observed the result of my experiment my neck was literally not worth a pinch of snuff; after a few minutes of passionate expostulation I should have been run up to convenient bough. To die for faction is a common evil; But to be hanged for nonsense is the devil.

I have run repeatedly, but never as I ran that day. At night I went out of town, and there was my own particular fire, quite distinct from the other, and burning as I thought with even greater vigour.

“On the wide level acres of the valley the topsoil lay deep and fertile. It required only a rich winter of rain to make it break forth in grass and flowers. The spring flowers in a wet year were unbelievable. The whole valley floor, and the foothills too, would be carpeted with lupins and poppies. Once a woman told me that colored flowers would seem more bright if you added a few white flowers to give the colors definition. Every petal of blue lupin is edged with white, so that a field of lupins is more blue than you can imagine. And mixed with these were splashes of California poppies. These too are of a burning color—not orange, not gold, but if pure gold were liquid and could raise a cream, that golden cream might be like the color of poppies.”

Willis Jepson wrote Trees in Paradise: A California History, part of which is available at Google Books.